We followed the railway tracks for part of the morning and saw a high speed train flash by. It made a lot of noise.

For about an hour we followed a railway line. 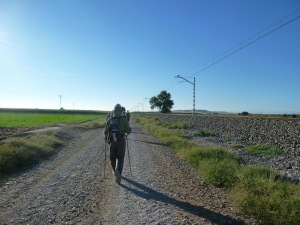 Following the railway line in the early morning

We met a French pilgrim who was walking the other way on the Camino to Santiago. He was 76 years of age and he told us that he had walked the Camino eight times. He looked very fit and said he wanted to walk the Camino one last time “before he died”.

Just after we stopped for a break Michael Bertie announced that we had just reached the 400 km mark.  Only 250 km to go to Manresa. Here members of the group raise four fingers to represent the achievement of reachng 400 km.

Stopping for a break 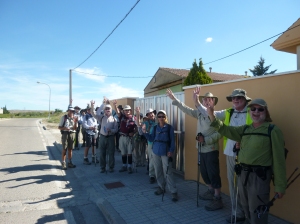 We were beside the Ebro River for the latter part of the morning. Then we entered the barren Monegros landscape, named so for the black-looking hills we could see in the distance. Los Monegros are the closest thing to desert landscape to be found anywhere in Europe.  Today the temperature reached 29 degrees centigrade. There was little shade from trees but we managed to find some pine trees under which we had lunch. We needed plenty of water today. 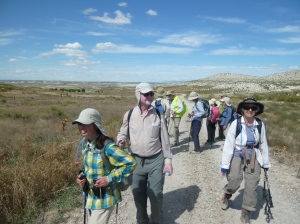 The beginning of the desert 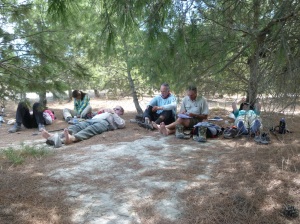 Lunch under some pine trees 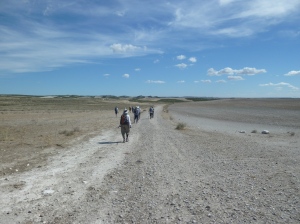 About mid-afternoon my shins started to ache and I slowed down. I was very appreciative that Vin Dillon and Michael Bertie slowed down and walked with me for a couple of hours in the hot sun while the other went ahead. Our walk finished in Venta de Santa Lucia, where we had a beer, and then we were driven back in a bus to our hotel in Fuentes de Ebro.