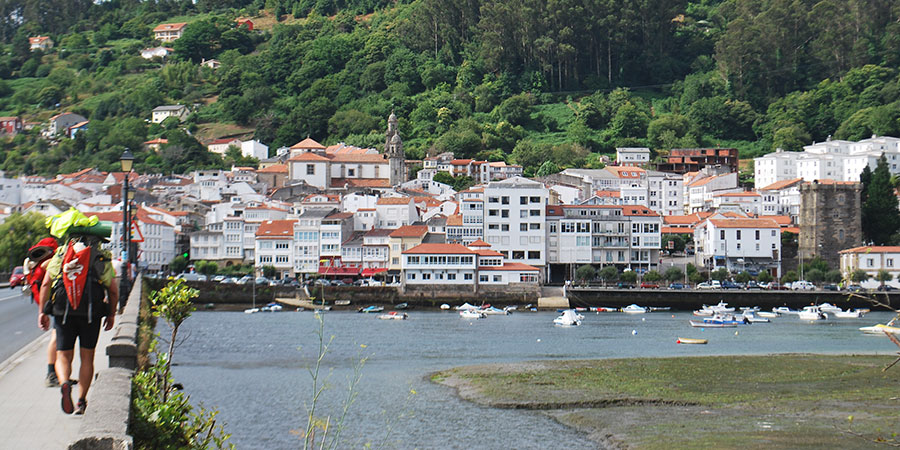 El Camino Inglés (The English Way) — also known as Camino de Los Ingleses (literally, “the way of the Englishmen”) — begins at the north coast of Spain in either Ferrol or A Coruña. El Camino Inglés can be traced all the way to the 12th century when it served as the main access route to Santiago for pilgrims coming from England, Scotland, Ireland and the Nordic countries of Norway, Sweden, Denmark, Finland and Iceland. 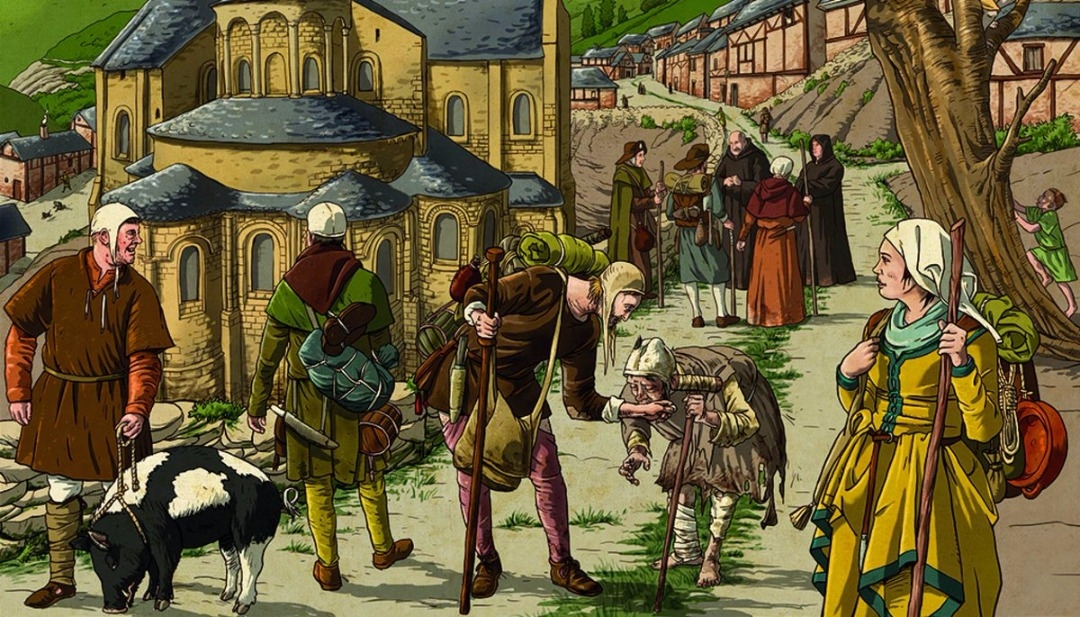 How the Canino Inglés might have looked in the Middle Ages

The Icelandic Benedictine monk, Nicolás Bergsson, wrote a description of his journey on foot from Iceland to Rome via Santiago. It took him five years, from 1154 to 1159. Two centuries later, during what is known as the Hundred Years’ War between France and England, the English came to Santiago by sea. English coins from the 14th and 15th centuries found in excavations of the cathedral at Santiago de Compostela, provide proof of the presence of Los Ingleses pilgrims.

The break between King Henry VIII (1509–1547) and the Catholic Church over his divorce from Catherine of Aragon — leading to the creation of the Church of England and Anglicanism — brought an end to English Camino for centuries. Today this camino has been revitalized.

By sea to the English Camino

For hundreds of years people sailed from Ireland to A Coruña in Northern Spain and walked the Camino Inglés to Santiago de Compostela from there. The Irish film, The Camino Voyage, documents how the Irish came to the Camino Inglés by sea. The movie tells the story of four modern day Irishmen who built a naomhóg (a traditional West Kerry boat), and retraced the 2,500 kilometer journey from Ireland to Northern Spain. If you click on the two photos below, you can view two different trailers of the movie. 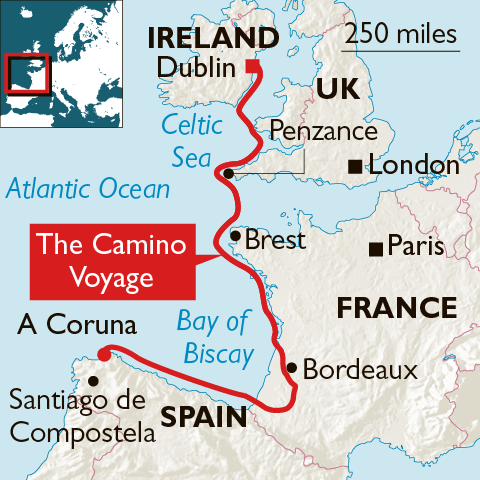 The route taken by the four Irishmen

Volunteering with the Camino Companions

I came to Santiago de Compostela for a break from the heat of Rome (37 degrees centigrade some days, and very humid) where I currently work at the International Office of Jesuit Refugee Service. For two weeks, from 18-31 August 2019, I was a volunteer with the Camino Companions team. The team was set up by a Faithful Companions of Jesus sister from Ireland, Katherine O’Flynn FCJ, who was formerly the Mother General. Our role was to help people who have recently finished the Camino Frances to debrief and reflect on their experience.

On weekend of 24-25 August, 2019 I had two days off and I walked the first two stages of the English Camino from Ferrol to Pontedeume, and Pontedeume to Betanzos. On the Friday evening I took a train from Santiago de Compostela to Ferrol.

Ferrol to Neda to Pontedeume (31 kilometers)

To begin the English Way, I walked down to the harbour of Ferrol where I found the marker of the start of the Camino Inglés.

The sign at the start of the English Camino

After that, I walked around the harbour which is quite beautiful.  I was feeling a little apprehensive because a long day of walking was ahead of me.

A small church beside the estuary

The scenery is quite beautiful

One of the small bays on Ferrol Harbour

I met a German woman named Jutta and we walked together until the town of Neda. It was nice to share the journey with her and share about our lives.

Jutta, my German companion for the morning

The town of Neda on the other side of the bay

An important landmark in this area is the Parque Natural Fragas do Eume, a nature park of 9,125 hectares of forest, the best preserved Atlantic coastal forest in Europe. In this beautiful natural setting, you will find the Monastery of Caaveiro, with amazing views over the river.

Every Saturday there is the Feirón in Pontedeume, an open market where you can buy local produce such as fruits and vegetables, as well as local cottage cheese, empanadas and honey. You can buy cottage cheese in the Feirón and have it with a local almond-based sweet called manguito eumés.

After you leave Pontedeume, there is a detour towards the Romanesque church of San Miguel de Breamo, with a nice view over the rias. The section moves into a rural road after Pontedeume towards Buíña and into the mountains to avoid the  AP-9 highway. After some ups and downs, you ill get to the mouth of the river Baxoi, with its wonderful marshland. The last leg takes you to Miño.

I stopped for a can of Aquarius on the way

The Camino follows the coastline until it crosses the medieval bridge of O Porco over the river Lambre, to go into Paderne and its mountains.

5 kilometres away, it crosses the village of O Porto, just after Chantada. The path starts descending towards Betanzos with beautiful views over the ria and the course of the river Mandeo. You will enter Betanzos through one of the gates of the medieval wall. The old town is one of the most highly regarded in the province, as Betanzos is considered the Galician capital of Gothic architecture, with its medieval gates still intact.

You can visit the Sanctuary of Os Remedios, the Praza da Constitución and the Praza de Sta María, the Fonte da Diana and generally the whole old town of Betanzos. People love to have something to drink and some pinchos in the Calexas and of course, you cannot miss the famous “tortilla de Betanzos” with the local light, fruity wine.

There are several festivals of interest such as O Globo, on the night of August 16th, when the largest hand-made paper balloon in the world is launched. Os Caneiros, the “romaría” on the river, takes place on 18th and 25th August, and the medieval fair, on the second weekend in July.

If you leave the old town, you will find the Roman bridge of As Cascas, the public washing place, a unique construction, and the park of O Pasatempo.

The facade of the newly refurbished cathedral in Santiago de Compostela

At Finisterra, the end of the world