I woke up this morning feeling very sore.  It was actually difficult to stand up after getting out of bed. I have set myself to walk the entire Ignatian Camino but I think I could do myself some serious damage if I walk today, so I have decided to take a rest for the day in the hotel.  I currently have an ice pack on my right shin in an attempt to bring down the swelling. 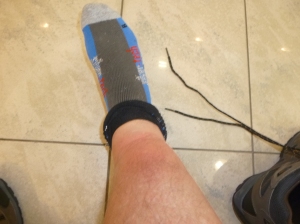 After breakfast we gathered outside the hotel where the bus was waiting to transfer the pilgrims back to Alcanadre. Peter Walden again briefed us on the walk helped by Larry Naismith’s advice on the weather and the lack of small towns on the way where pilgrims could find water.  Pilgrims took plenty of water in their daypacks.

Ignatian exercise.  I talked about the Ignatian exercise for the day.  Today we begin the “Second Week” of the Spiritual Exercises. Our point of entry is through a meditation that invites us to follow Christ the King.

The grace we ask for: Despite my limitations, and aware of the love of the Father for me, I ask for the grace to feel personally called to journey with Jesus as his companion and co-laborer.

The grace we were praying for yesterday was a deep awareness of God’s merciful love.  When a person experiences being a loved sinner, it often leads him or her to desire to respond to that love. Today we begin to meditate on Jesus’ invitation to walk beside him in his work. In the Spiritual Exercises Ignatius places God’s call to work with Christ just after the meditations that touch on our own human sinfulness. The juxtaposition is important: God calls us to work closely with him in the world as ‘loved sinners’. The gospel for today is Luke 5: 27-32 in which Jesus calls Levi, a Tax Collector and a hated public sinner, to “Follow me”. Even though we may feel unworthy of being called to be companions of Jesus, he calls us nonetheless.

Fr Joe Taylor and I are both feeling a little “worse for wear” today so we stayed behind. As we waved off the others on the bus back to Alcanadre I felt a twinge of sadness. My goal of walking the entire Ignatian Camino will not be met. 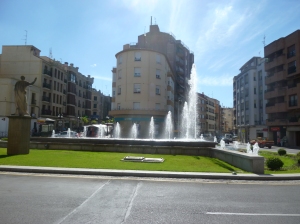 I took some time in the morning to wander, gently, around Calahorra.  It was a city of great importance in Roman times when it was called “Calagurris”.  There are still Roman ruins to be found in the city. Calahorra has a long pilgrim tradition, as can be seen in the baptismal font of the 16th century Cathedral of Santa María (covered with shells, gourds, and the image of St. James).

I purchased a pair of new boots and visited a Farmacia for some 600 mg Ibuprofen (we can only get 200 mg tablets in Australia) and some gel to rub on.

Peter Walden took some photos if the walk today which are displayed below.

The Hotel Cuidad of Calahorra 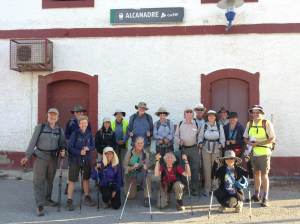 At the Alcanadre Station ready to start

The walk was fairly flat today 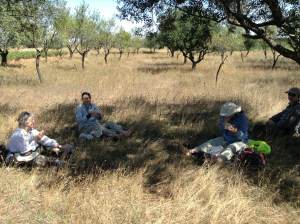 Enjoying lunch under a tree