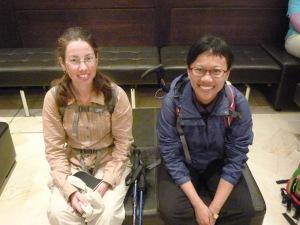 Our two youngest pilgrims, Amanda and Tracy, ready for the day’s walking

This morning we took the bus back to Gallur where we had our briefing about the route: Today was a short walking stage, mainly along hard-packed dirt farming tracks.  Peter Walden writes:

“We took a bus from our hotel in Tudela to Gallur, our starting point for this leg of the pilgrimage.  We must be getting stronger as we now look upon the 21.2 kms today as an easy day compared to what we have been walking, particularly yesterday. At Gallur we started from the Cathedral and saw that the roof was covered in stork nests. To one side was the statue of a man looking up,  waving his walking stick and yelling.  Our opinion was that he was trying to  frighten the storks away.” 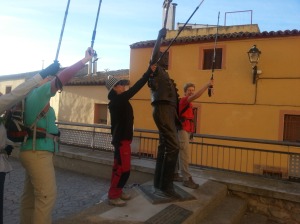 Pilgrims assisting the statue to shoo away the storks

We walked mostly on sealed roads all morning and made good progress. It was hotter today but again we were blessed with a gentle cool breeze at our backs. Once again we passed through fertile land irrigated by water from the Ebro. Many of us enjoyed the wild figs that we were able pick along the road.

Goats, sheep and donkeys on the road 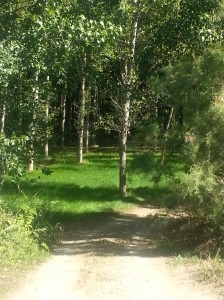 Passing through a plantation

At the 15 km mark we stopped for a group photo to celebrate passing 320 kms which is the half way point of our Pilgrimage. We rejoined the Ebro River in the morning and stopped in a bar in the small town of Cabanas de Ebro for lunch at about 1:30pm. The protective barriers were still in place along the streets as yesterday they had celebrated the running of the bulls through the town streets.

Fr Paddy Mugavin ready for the bull run in Cabanas de Ebro, but one day late

After lunch there only remained another 5kms to our destination for which we were grateful as the heat of the sun was intense. We arrived at Hotel Los Angeles, Aragon at 3:30pm in good spirits.”

The Ignatian Camino passes through Luceni, a small town with an ancient Roman presence (excavations of the first settlements have unearthed coins and medals from the time of 2nd century AD emperor Antonius Pius).

According to historians, it was on the outskirts of Luceni where Ignatius debated about whether or not to kill the Muslim with whom he had had an argument. Here is the quote from Ignatius’ Autobiography:

While he journeyed on, a Saracen mounted on a horse came up with him. In the course of the conversation mention was made of the Blessed Virgin. The stranger remarked that though he admitted that the Mother of Christ had conceived without detriment to her virginal purity, yet he could not believe that after the conception of her divine Son she was still a virgin. He was so obstinate in holding this opinion, that no amount of reasoning on the part of Ignatius could force him to abandon it. Shortly afterward the Saracen rode on, leaving the pilgrim to his own reflections. These were not of the most peaceful nature. He was sorely troubled as he thought over the conduct of his recent fellow-traveller, and felt that he had but poorly acquitted himself of his duty of honoring the Mother of God. The longer his mind thought upon the matter, the more his soul was filled with indignation against himself for having allowed the Saracen to speak as he had done of the Blessed Virgin, and for the lack of courage he fancied he had shown in not at once resenting the insult. He consequently felt impelled by a strong impulse to hasten after him and slay the miscreant for the insulting language he had used. After much internal conflict with these thoughts, he still remained in doubt, nor could he decide what course to follow. The Saracen, who had ridden on, had mentioned to him that it was his intention to proceed to a town not far distant from the highroad. At length, Ignatius, wearied by his inward struggle and not arriving at any determination, decided to settle all his doubts in the following novel way: he would give free rein to his horse, and if, on coming to the crossroad, his horse should turn into the path that led to the destination of the Moor, he would pursue him and kill him; but if his horse kept to the highroad he would allow the wretch to escape. Having done as he had decided, it happened through the Providence of God that his horse kept to the highroad, though the place was distant only about thirty or forty yards, and the way leading to it was very wide and easy. 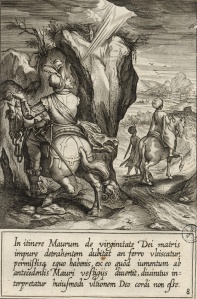 Inigo and the Moor

Inigo’s pilgrimage could have had such a dramatically different conclusion had the horse chosen the other path.  He would have become a murderer rather than a saint.  To say that his capacity for discernment at this stage in his life was still quite undeveloped is an understatement.

The destination today was Alagón.  In the old part of town there is a former college of the Society of Jesus, beside the church of Saint Anthony of Padua. 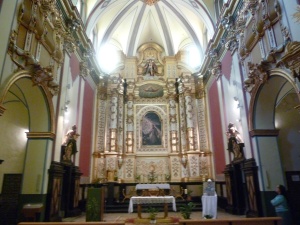 Chapel of the Jesuit School in Alagon 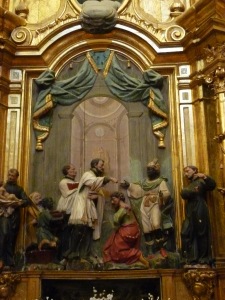 A mural of Goya’s can be found in the old Jesuit College, which is now a cultural centre and a centre for adult education. He painted the fresco in 1765-66. It covers the vault of the interior staircase and represents the Exaltation of the Name of Jesus.  In the centre appears the anagram of Jesus which is also the symbol of the Society of Jesus (IHS), surrounded by cherubim floating in a cloud of Glory. The composition is simple and of great beauty, and demonstrates that Goya, despite his youth (he was 19 years at the time he painted it) showed a technical and artisitic ability that was already considerable.

Goya’s mural seen from the bottom of the stairwell

Close up of Goya’s Mural